Adam Mackintosh has made his mark as an accomplished American songwriter and performer. Performing an original work with Storm Large and The Grant Park Orchestra and receiving an invitation to record an original song for The Alan Lomax Project at Purdue University have solidified his presence. As a passionate public speaker, mentor, instructor, private advisor on artistry in the music business, and performer his skill set is ever-broadening. He lives for music education and scholarship funding focusing his performance skills on fronting The Last Dancers, and greater writing skills on creating for other artists while working with Film and Television in his new home, Chicago, Illinois. As a former band leader for the Portland, Oregon art-rock, indie treasure, Gruesome Galore (6 European Tours) Adam has finely tailored his crafts of writing and performance, captured longevity, and excelled as a songwriter. Contributing six concurrent years at Steel Bridge Songfest with some of the nation's most prolific songwriters he spans genres, writing for several other performers from European Cabaret Artists to Modern Symphonic Pioneers. Credited with over 500 concerts in the US and Europe to crowds ranging from 100 to 10,000 his performances are rare and unique. Additionally, focusing on soundtrack work, credits Westbound (Official Selection Nashville Film Fest), June Falling Down (Official Selection Wisconsin Film Fest) and Damaged Goods. 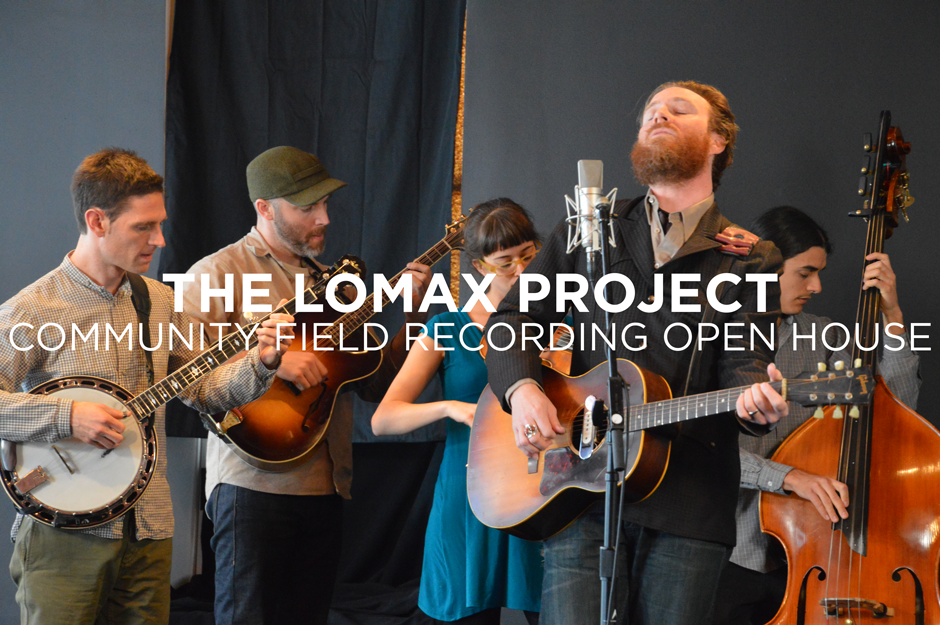 
Fans compare his music to many classic artists such as T. Rex, The Byrds, The Kinks, Harry , David Bowie, John Lennon, and George Harrison, as well as many contemporary artists such as Monsters of Folk, My Morning Jacket, M. Ward, Band Of Horses, Jet, Iron And Wine and Radiohead.

2015 SXSW Review
"The Last Dancers are a true American rock band. Adam’s voice reminds me of a mix of a young Bob Dylan, Alex Turner of the Arctic Monkeys (sans the British accent) and Jack White. The style is reminiscent to that of Big Star with a blues/ edge and Adam's skills are reminiscent to that of The Beatles (yes, I said it, crucify me now, super fans!). They're also a ton of fun to watch live and I'm only sorry I couldn't stay to see them longer..." -Laura Mendoza Metro Detroit Times


The Last Dancers
Soul child of /performer Adam Mackintosh, The Last Dancers down original rock with a classic, guitar-driven, pop-melodic sensibility. The genre line blurs from verse to chorus and no style of expression is off limits. Lap Steel, 12-String and 3 part harmony over "right-of-the-dial" BPM's makes for an electrifying wave after wave of rock pleasure.
-The Black Apple Portland, Oregon 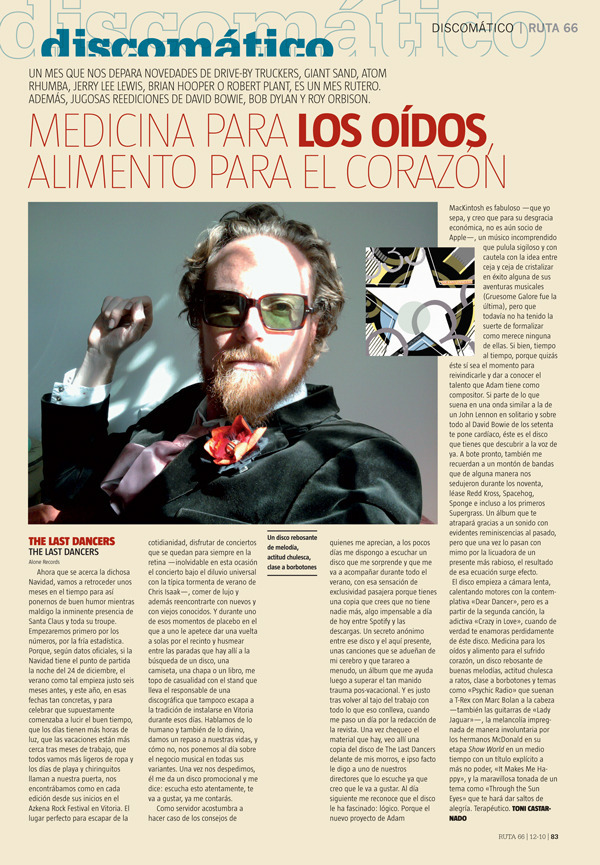 A month that brings us novelties from Drive-by Truckers, Giant S, Atom Rhumba, Jerry Lee Lewis, Brian Hooper or Robert Plant is some month of touring; in addition to juicy re-releases of David Bowie, Bob Dylan and Roy Orbison.

Medicine for the Ears -- Food for the Heart

Now that the happy event of Christmas is here, why don't we go back a few months to get in a better mood while I curse Santa Claus and his damned troops. Let's start with numbers, with cold statistics, because according to official information, if Christmas begins on the night of the 24th of December, then summer begins 6 months earlier. This year, on that exact date, in order to celebrate the supposed beginning of nice weather and longer days, that vacation is closer after months of work, that we have fewer clothes to wear and beach days are knocking on the door, we found ourselves, just like every year since it started, in the Azkena Rock Festival in Vitoria. The perfect place to escape from every
life, to enjoy concerts that stay forever on your retina - unforgettable because on this occasion the concert was under a universal flood with the typical Chris Isaak summer storm - to eat gourmet and meet up with new and old friends. And during one of those placebo moments in which one feels like taking a walk around the edge of the crowd in search of an album, a , a pin, or a book, I bump into a stand with the manager of a record label that never misses the to come to Vitoria. We talked about things human and divine, went over our lives and, of course, brought us up to speed on the music business in all of its variations. When we said goodbye, he gave me a promotion
and said, "Listen to this carefully, you'll like it. You'll see."

Because I usually listen to advice from people I respect, a few days later I made time to listen to an album that surprised me and would accompany me the entire summer. I had that fleeting sense of exclusivity you feel because you have a copy that no one else has, almost unthinkable these days between Spotify and downloads, an anonymous secret between the album and myself, songs that have taken control of my brain, that I often hum. It's an album that later helps me overcome the post-vacation trauma.

It's just after getting back to the grind of work and everything that goes with it, when I stop by the magazine's editorial offices. When I take a look at what they are working on, I see a copy of the album "The Last Dancers" in front of my face and immediately tell one of the directors that I have already heard it and that he will like it a lot. The next day he tells me the album has fascinated him... Logical. Because the new project from Adam MacKintosh is fabulous. As far as I know, and to his economic detriment, he is not an Apple partner, but a misunderstood musician that quietly and carefully weaves the goal of making it big with one of his musical adventures (Gruesome Galore was the last), but has not yet had the luck that any of them deserves.

However, it may be time, this may be the moment for Adam to come into his own and make known his talent as a composer. If what you like is similar to solo John Lennon or if David Bowie in the 70's thrills your heart, this is the album you must discover now, hurry up. They also remind me a lot of groups who seduced us in the 90's, like Redd Kross, Spacehog, Sponge and even the beginnings of Supergrass. This album will ensnare you thanks to a sound with obvious nods to the past, but at the same time a sound that is carefully blended with a more angry present, the result leaving an effective impact. The album begins in
Slow motion, warming up its motor with the thoughtful "Dear Dancer", but it is from the second song (the addictive "Crazy in Love") on that you truly, hopelessly fall in love with this album. Medicine for your ears, food for your suffering heart. An album bursting with good melodies, a sometimes anti-establishment attitude, an abundance of class and themes like "Psychic Radio" that sounds like T-Rex with Marc Bolan in the lead - also the guitars from "Lady Jaguar" -, with the impregnated melancholy of the McDonald Brothers in their Show World phase in half time with an explicit title, "It Makes Me Happy". The wonderful tunes like "Through the Sun Eyes" will make you jump for joy. Therapeutic.
Toni Castarnado.

Live at Dante's before Fireballs of Freedom and Dead Moon. Photos: Bill Hefferman 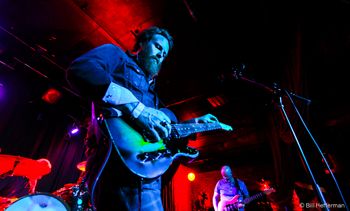 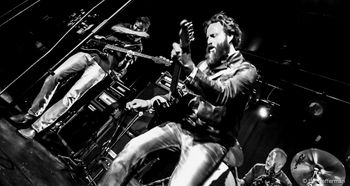 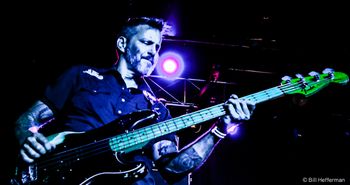 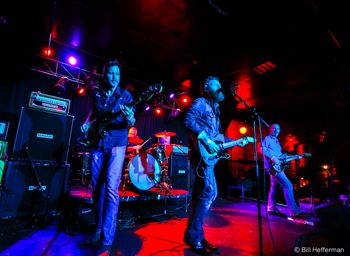 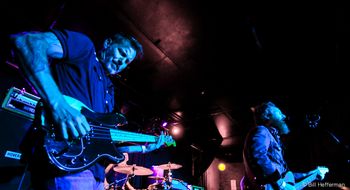 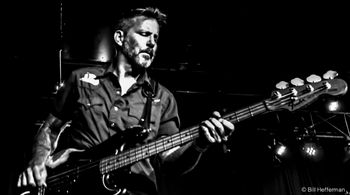 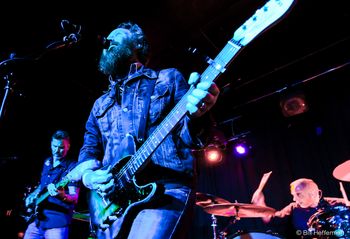 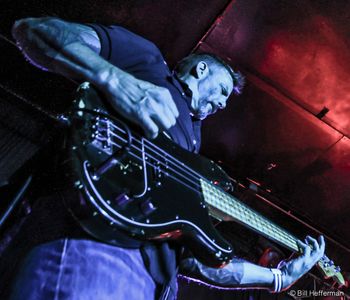 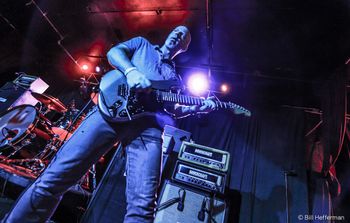 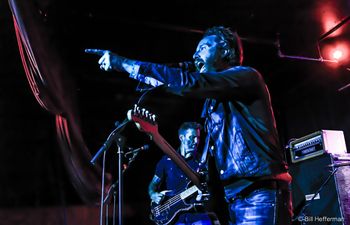 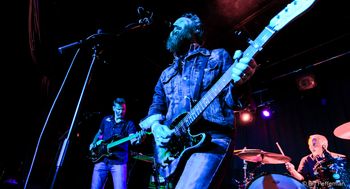